It’s Two Question Tuesday, the day of the week where we ask our Fiction Fountain team of writers some fun or difficult questions about writing, reading, and generally being.  Let’s see what our word artists have to say this week!

We’ve asked 4 authors this week’s Pick One question. Will they choose a series, a novel, a novella, or a short story?

As a reader, I like the Novella format. They are generally as sophisticated as a novel, but you can read it in a single sitting.

As a reader, I love them all, but tend to read more novels or series than the other. Perhaps for no other reason than I want to be truly immersed in the created worlds.  A novel and a series of novels gives me longer opportunity to do so.

As a writer, novels seem to be my thing.  Even though the six published works are all connected in the same universe with cameo appearances by other characters…they all stand on their own.  The story within the cover is complete. That doesn’t mean, however, that the same characters will not continue with a new story later on. To be continued…

A novel is preferable to me and what I would read. Not too short and not too long.

Yes! Oh. I can’t have them all?  I prefer to write and read shared world series with interconnected characters running through each other’s stories.  As a reader, there’s more for me to devour in the same galaxy/world/city!  In my own writing work I create big big worlds that I just can’t get enough of and want to spend more time hanging out in while I’m at the keyboard. 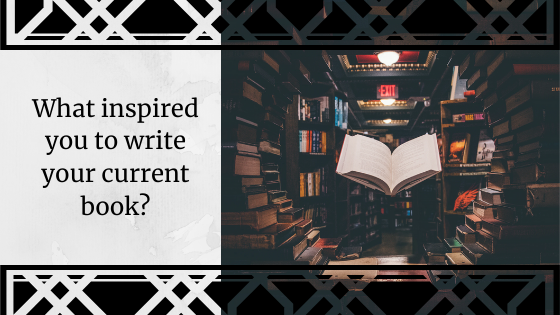 We asked the same 4 writers our tough question to find out what inspired them to write the book they’re currently working on. Check out their answers below!

Thunder Moon Tussle resulted in another novel that is in progress, Mask of the Widow’s Moon, needed a better backstory. The story began as an exploration between two very contrasting characters and evolved into as strong Romance and Action Adventure story. My inspiration for the story background had been the now defunct Constellation program. One of the requirements for the missions to be done in two launches instead of one meant access to the lunar poles. The story assumes a system that does not have access to the poles and results in the construction of a road to reach the lunar north pole. The adventure takes place on this road twenty years after it was abandoned.

Currently polishing up a new novel – Behind Green Door: The Magic of Mystic May
When Mystic May enters the haunted orphanage attic, she begins a magical journey foretold by a four-hundred-year-old prophecy, one that leads to the strange little town of HollyVale. Surrounded by lies and flooded by late seventeenth century dreams about Wizard Holly and Seer Vale, 17-year-old Mystic is forced to unravel many HollyVale secrets. Can she unveil the unique circumstances surrounding her birth in time to close the dark magic doorways? Or will the sinister gates created with her first breath be opened, ending all peace on earth?

Inspired by catching the ancestry bug and learning about our family in Ipswich (just outside of Salem) in the late 1600’s.

It is the final ‘book’ in my Troupe Quadrilogy.  It is taking place during the summer months, so it is supposed to have this big Summer event feel to it, gladiator fights, spy intrigue, a musical sequence.  This is close to the characters’ development mostly for the fallen knight turned fighter, what happens when what he is comes to light, and how the troupe helps him.

The original draft of Truth Spark was the result of a few 60-80 hour work weeks at the office during storm season…the no-sleep delirium & frequent power outages had me wondering what would happen if the thunderstorm outside were caused by hunky electrical heroes & dastardly villains fighting to control powerlines in the area.

Want to know more about these writers? Check them out, and the rest of the team, via the About page links on the top menu.

Okay lovely readers, your turn!  What is your favorite: series, novel, novella, or short story?

And visiting writers, hey–tell us about YOUR inspirations!

Tell us all about it in the comments, or come join us on Discord!