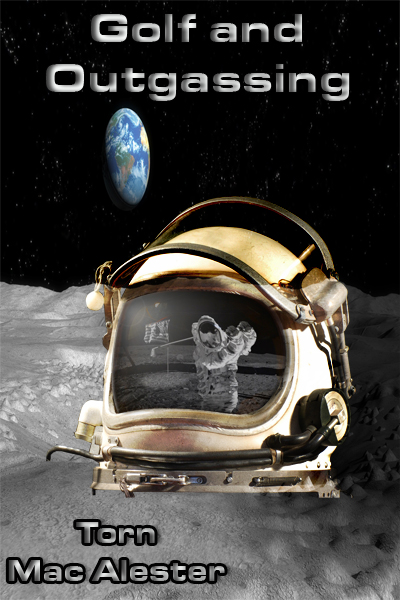 Annie MacInturner glanced at the space-suited figure moving toward her across the lunar surface. It was her rookie crewmate Milt Johnson. She noted the ease with which he moved. He had difficulty moving during training on Earth, since his suit hindered him. She had figured he would get his moon legs, and it pleased her to see it come true.

“Looks good,” she said as he reached her position near the crawler. “We get these garbage cans set out, we’ll call it a day.” She referred to the fifty-gallon-drum-sized experiments they needed to unload from the six-wheeled crawler. The setup of the experimental packages was the goal of the first EVA. Throughout training before the mission, they had done the work in three or four hours. They had started hour five a few minutes ago.

“You’re the boss,” answered Milt in his relaxed style. She had known him for two years, since he joined the space agency. He had a reputation for resourcefulness. He always had the most information about anything, including rumors. He also had a know-it-all personality that grated against many in the astronaut office. Even though Milt seemed to have the answers, many times he was right. Annie was glad she gave him a chance to join her on his rookie flight.

“Okay, let’s get after it.” She grabbed one of the garbage cans. It contained a soil mineralogy experiment. She grinned, taking the can and knocking herself off balance. “What the–?”

“Problem boss?” Milt asked in a tone suggesting a joke.

“Damn thing is off balance.” Annie realized that even though the weights of the experiments were much less, moving their mass was difficult. It had been affecting her most of the day, but this last one turned out to be worse than the others.

She struggled a moment, finding the package top-heavy. She didn’t recall the same being true on the simulator. The simulation team had forgotten something when they made the training item. On the moon, it only weighed thirty pounds, though having some mass off-center meant it carried significant inertia. Plus, it outweighed her, making it difficult to move. The fact she had her Earth strength to wrestle with it made the movement possible.

The complete story Golf and Outgassing by Torn MacAlester is available here at Torn's website tornmacalester.com.