Skip to content
View cart “SandBoxed: Paradise or Prison : by Yvonne DeBandi” has been added to your cart.

Vortex Visions: Keepers of the Stone : by Yvonne DeBandi

If everyone around you was speaking riddles, could you figure them out in time to save the world?

The hot desert sun wasn’t the only reason Diamond “Didi” Herkimer was sweating bullets, there was a relentless ring of explosive fire pressed against her forehead. The fate of the world hung in the balance of her actions, and time was running out.

Held prisoner, deep inside caves of the Grand Canyon, she was determined not to fail. They had solved the secret map mystery, but the solution presented was yet another series of riddles. Would she live up to the prophecy, fulfill her destiny, and stop the murder of Mother Earth…or was the iron barrel to be her very last vision?

Join Diamond and Joe as they solve the cryptic messages and race against the deadline of the summer solstice full moon. 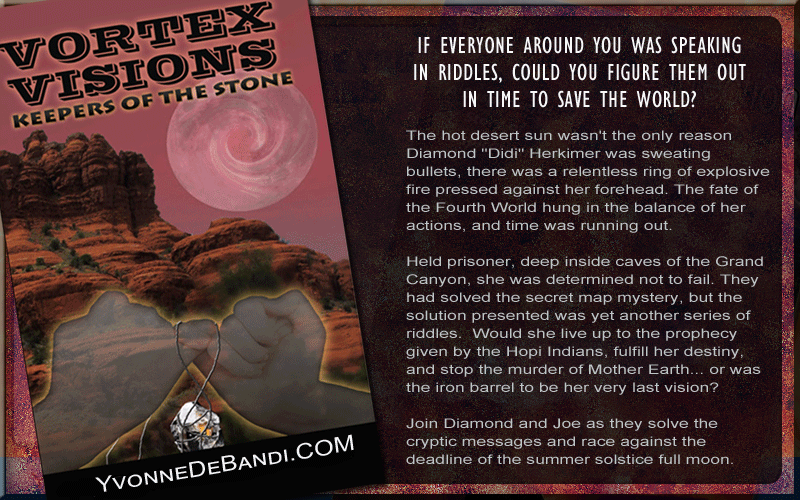 I glanced down the long bar for what felt like the hundredth time that Friday night.  My curiosity was on overdrive. The mysterious gentleman that sat there had wandered in every evening this week, immediately taking ownership of the single sidebar stool in the corner. He was tall, ruggedly handsome, wearing dungarees and a five o’clock shadow. Completely covered in dust, he looked as if he had been roaming around the desert for many days.

On top of his head was a hat that reminded me of Harrison Ford in the adventure movies I loved; but, it wasn’t the hat that made the man mysterious. With each visit, he held something in his hand with great care. His reverent and thoughtful gaze gave me the impression that the unknown object was quite precious to him; and, when he thought no one was watching, he stared at it, twisting it over and over in his palm.

I heard him speak that first evening as he ordered his drink. He had a deep voice that was delivered with a slight sideways grin.  I remembered thinking how it sounded like a whisper meant only for me; and yet, I could hear him clearly in the loud, crowded room.

He was a Guinness man.  Had three each night he had been here. He drank the mugs slowly; but, when he swallowed the end of his third, he seemed to set the glass down with a bit of force. Then he would stand, nod to me with a wink and slight tip of hat, before wandering out just as magnificently as he had wandered in.  The man had a presence.

Truth be told, he caught my attention the very first moment he crossed the entrance threshold. Since then, I found him strolling into my thoughts throughout the day. The man was mysterious himself, but what was the object that captivated his attention all night long? Each time I approached to provide him with a fresh beverage, he closed his fingers tightly around it, blocking my view.

He hadn’t talked to anyone else. In fact, I had not heard him speak since that first night.  To order, he merely nodded with that devilish glint in his eye and a friendly smirk that indicated he was a witty man when he chose to be.  When he failed to speak, yet stared at me with magnetic eyes I could not escape, I stuttered one word like an idiot.

He had responded each time with another confirming nod, his steel-blue eyes remaining focused on mine like lasers, and his grin widening further at my witnessed discomfort. Usually, that would have annoyed me; but instead, I was utterly mesmerized. His expression reminded me of someone that knew a secret I didn’t, which captivated me even more. I literally had to fight the temptation to linger, and force my feet to walk away with every serving.

Tonight, watching as surreptitiously as I could, I saw him swallow the end of his third beer while I sadly wondered if this would be his final exit. To my surprise, he didn’t repeat his routine.  Instead, he pushed the glass towards my side of the bar, indicating he was ready for a fourth.

I filled another mug from the tap and approached with as much grace as I could.  When I got only a few steps away, I saw his hand close into a fist, once again protecting the object from my prying eyes.

“M-m-making it a wild and crazy Friday night?” I asked quietly, feeling ridiculously vulnerable and shy.

“You could say that, but the night is still young.”

The man smiled with complete confidence. He was amused by my discomfort and made no attempt to hide it, chuckling audibly as I shifted my stance to walk away.  Turning back to the seductive sound in response, he winked at me ever so slightly. His deep voice then whispered words I never expected.

There are no reviews yet.

Be the first to review “Vortex Visions: Keepers of the Stone : by Yvonne DeBandi” Cancel reply